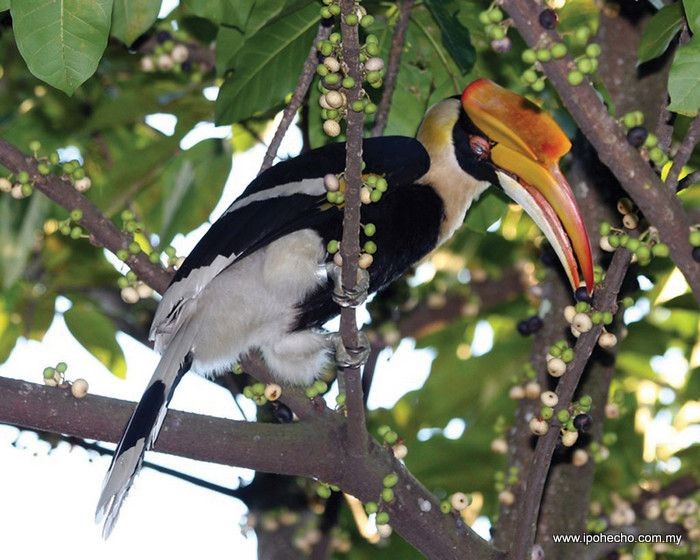 The Royal Belum Forest Reserve is an important biological resource for the country as well as a valuable natural breeding ground for plants and animals. Amongst the different native species that nestle in the forest of Royal Belum, the Hornbill family is one of the valuable species that can only be found in the Asian and African Continent.

Amidst the lush green forest that is 130 million years old, tourists can witness the calm and soothing environment while witnessing hundreds of Hornbills flying freely among the woods. Even though the species may seem invulnerable, it is actually on the International Union for Conservation of Nature’s (IUCN) list of threatened species due to habitat loss and illegal poaching.

Malaysian Nature Society (MNS) is currently taking the initiative in protecting the different endangered species in Malaysia, especially the Hornbill species in Temengor and Royal Belum starting from year 2014. MNS’s Technical Specialist, Yeap Chin Aik, said that the forest reserve of Royal Belum-Temengor, Perak and Ulu Muda, Kedah is currently the habitat of at least 10 of the total 54 species of the birds in the entire world. On the other hand, Sabah and Sarawak only has 8 different Hornbill species. Other countries such as Indonesia and Thailand also have about 13 different Hornbill species each.

“The two different locations in Peninsular Malaysia are iconic tourist attractions that have managed to attract tourists from all over the world. Since year 2004, the society has been conducting its conservation efforts on a small scale,” he said. He also added that the conservation efforts will last for an estimation of 10 years and that the main population of Hornbills rely largely on the size of the Malaysia’s rainforests.

The Living Habitat of Hornbills

The Hornbill or also known as the ‘Buceros’, is a group of bird that could be easily identified by the general public due to their striking coloured feathers and their long beaks. Moving in packs, they possess a soft horn-like beak that is mostly orange or yellow in colour, and is known to love to land on the Pokok Ara due to the amount of fruits the tree bears.

Hornbills also have a very unique living practice whereby they rely on other species such as the Woodpecker and tree insects or the natural process of the tree to build holes within the tree or branches. These tree holes will then be selected by the female Hornbill and evaluated whether it is a suitable habitat for her to build a nest for her babies. A female Hornbill can produce up to six eggs during her breeding period. The suitable tree hole will then be covered in her faeces, food waste or soil until a single small hole is left for the male Hornbill to provide food.

The food including a mixture of Ara fruit, worms or insects will then be stored in the beak of the male Hornbill and sent to the babies and the female Hornbill living in their nest. The male would continue the process for about two to three times a day until the babies are ready to leave the nest.

After sometime, if the female and her babies are too big for the nest, the female will choose to break out from the nest and rebuild the wall to secure her babies; she will then join the male bird In search of food to feed her babies. Other species might differ, where instead of the mother, the baby hornbills will break down the walls on its own without the help of the adult birds. The breeding period of Hornbills may vary from three to seven or eight months.

Migration Behaviour of the Hornbills

The Plain-Pouched Hornbill are amongst the different species that migrate to our thick rain forests during the months of August till September. The Plain-Pouched Hornbill is included in the IUCN’s list of endangered species and only an estimated 7000 full-grown birds are currently found in the world. The Oriental Pied Hornbill and Rhinoceros Hornbill are also amongst the 10 species that are often found in Royal Belum and Temengor forest. 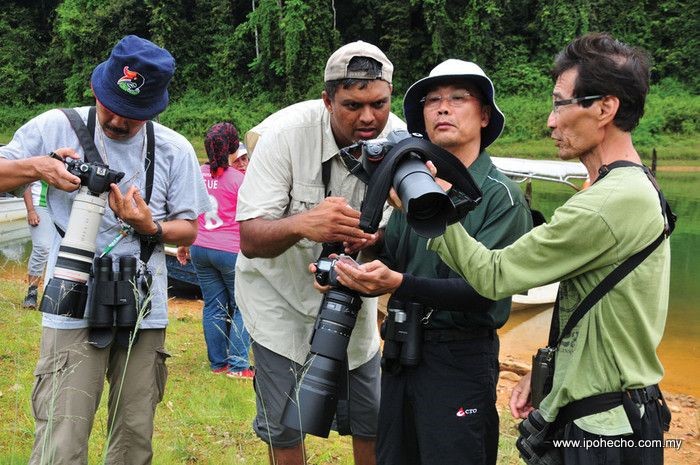 MNS team in the process of identifying the type of hornbill witnessed through photographs.

Royal Belum is set on its course to preserve the vast rain forest that attracts millions of Hornbills every year. The forest that is presumed to be safe and untouched by development would be kept as such with the efforts made by MNS. The society will be doing its very best to ensure that the birds are undisturbed even with the growing amount of tourists visiting the forests.

Royal Belum the oldest forest in the world, topping even the famous Amazon, is one of the country’s most prized possessions and also Perak’s pride and glory. Paying a visit to the forest once, might not be enough, seeing as it is filled with mysteries that are waiting to be unravelled. So do grab your bag and journey on a quest to discovery as Royal Belum serves to enchant its visitors with the beauty of nature and its unruffled scenery.