We, the undersigned civil society organisations and community groups hereby call on the Dato’ Menteri Besar Selangor, YAB Tuan Amirudin Bin Shari and the Majlis Mesyuarat Kerajaan Negeri (MMKN) to save and not degazette 23.8 hectares of land within the Bukit Lagong Forest Reserve (Bukit Lagong FR) for mixed development by PKNS.

We urge that this forested area be maintained as a water catchment and soil protection forest. It serves as a critical forest corridor to Taman Warisan Negeri Selangor (Selangor State Park) 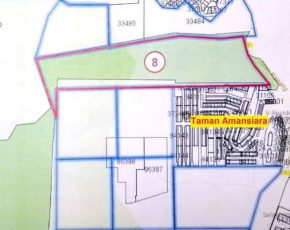 The area proposed for development is listed as plot 8 in the map provided by the Forestry Department of Selangor and is located in Compartment 19 of Bukit Lagong FR.

The proposed plot for degazettement, is part of Bukit Lagong FR that has been ranked an Environmentally Sensitive Area (ESA) Rank 1. This biologically diverse conservation area serves as a water catchment area providing clean water supply for local communities, protects slopes, prevents landslides and very importantly is a roaming ground for the Orang Asli.

This plot plays a very important role as a narrow forest corridor connecting Bukit Lagong FR to the the Templer and Kanching Recreational Forests as well as the Serendah Forest Reserve which form part of the Selangor State Park. The overall biodiversity of Bukit Lagong FR will deteriorate if these linkages are lost.

The Forest Research Institute of Malaysia (FRIM), declared a National Heritage in 2012, was nominated as a UNESCO World Heritage Site in 2017. Bukit Lagong FR serves as a buffer for the conservation of its 544 ha campus. There are major concerns the proposed development might affect FRIM’s chances of achieving the UNESCO World Heritage Site (WHS) status. The proposed degazettement will become a gateway for further demands to degazette the state’s forest reserves for development purposes. It will not be a positive reflection on the Selangor State Government’s commitment to sustainably manage, protect and conserve the state’s permanent forest reserves and proposed World Heritage Sites.

The proposed plot for degazettement is currently a tall and close-canopied forest, pristine in nature. Indigenous tree species such as Meranti tembaga, Meranti kepong, Merbau and Petai, as well as an abundance of wildlife tracks serve to exemplify a species rich lowland dipterocarp forest in the area. At least three mapped tributaries of Sungai Gapis flow through the plot and they serve as sources of water for wildlife living in the forest area.

The lives of the Orang Asli at Kampung Orang Asli Bukit Lagong will be adversely affected. This plot forms part of their roaming grounds. The community utilizes the forest resources to generate income and as a source of sustenance.

The proposed plot is located between two existing housing areas, Taman Amansiara and Templer Hills. Many portions of the land consist of steep hill slopes over 25 – 35 degrees. Development could potentially trigger soil erosion and landslides. The steep terrain makes the soil vulnerable to movement. The risk of flooding will also increase. Under development guidelines, areas with such steep slopes should be conserved and kept as soil protection forest.

Development in the proposed area will adversely impact the current residents of Taman Amansiara and Taman Templer Saujana. Development within the plot will result in pollution of waterways, the inevitable sedimentation problem in downstream areas. We also cannot ignore the potential negative impact on ecotourism.

Surrounding areas were hit by landslides in 2009 during the development of Taman Amansiara and in 2013 when bungalows in Templer Park were being built. Although completed in 2013, bungalow houses at Templer Hills still remain unoccupied, as no Certificate of Fitness (CF) has been issued.

The proposed area for degazettement is unsuitable for development. Development projects in the permanent reserved forest or forested area will only provide short-term benefits to the Selangor State Government. Chipping away at our forest reserves is not a sustainable practice. In the long run it will translate into the continuing overall loss of forested area in our state and country further compromising ecosystem integrity. Forest conservation in Selangor should be given the highest priority. By saving and maintaining the 23.8 ha of Bukit Lagong FR, the state government and the people will benefit from invaluable long-term social and economic benefits.