MNS turns 80 in 2020 and Launch of MNJ Special Edition

The Malaysian Nature Society (MNS) has launched the Malayan Nature Journal – Special Edition 2019 (MNJSE) in conjunction with its 80th anniversary celebrations. A second-series edition, the journal is based on the history of early pioneers in conservation, looking into the work, records and legacies of the individuals who have served Malaya and Malaysia in the past.The journal comprises five feature articles, including past MNS publication features, letters and important notes prepared by MNS contributors, mainly MNS members and nature conservation community partners. The launch of the journal at the MNS headquarters in Kuala Lumpur was held simultaneously with its 80th anniversary pre-launch. During the launch, MNS officially publicised its upcoming 2020 events and revealed the society’s 80th anniversary banner. 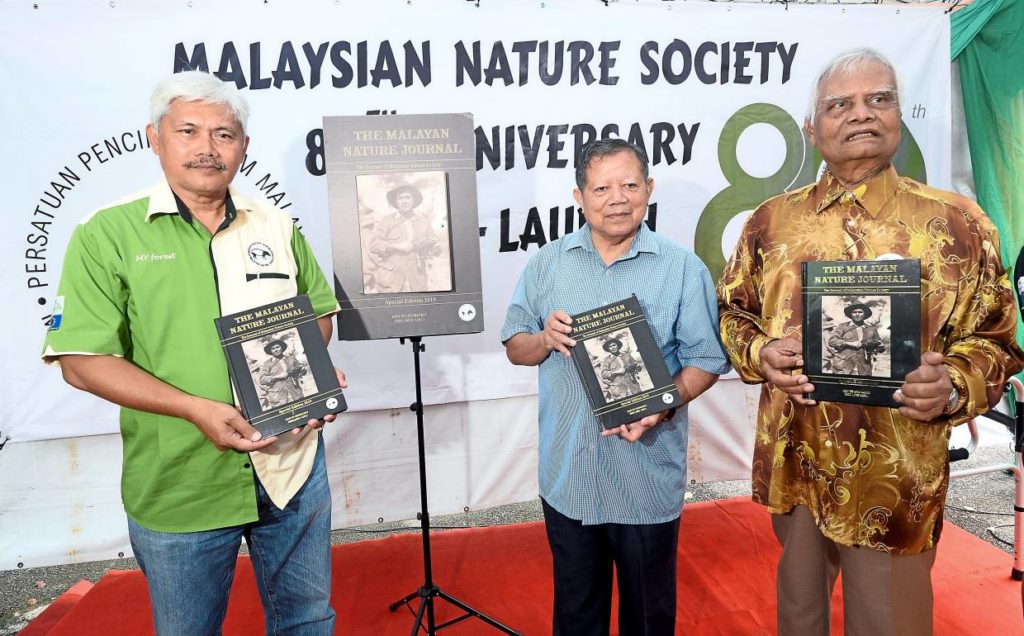 MNS president Prof Dr Ahmad Ismail said the society’s vision to protect, conserve and manage nature has been strengthened over the years by the existence of 14 branches of MNS in the country. There are also nearly 500 schools which have taken part in the MNS-KPA (Kelab Pencinta Alam) programme established in 1991.“I hope this number will grow soon and MNS is expecting to have 1,000 schools joining MNS-KPA schools by the end of 2020, ” he said. “MNS focuses on programmes like awareness, education and research that have been drawn in our 14-year strategic plan 2017-2030. “Currently, we are working on Ulu Muda to establish the place as a state park as an initiative to declare more reserved forests.

“We have to do an expedition, collect scientific information and inform and educate the public about the Ulu Muda project.“By 2021, we hope Ulu Muda will be announced as a state park with consideration of the government’s loss and profit, ” said Prof Ahmad. Based on MNS’ achievement in the past 80 years, Prof Ahmad said, more people would trust and support MNS in protecting nature.MNS executive director I.S. Shanmugaraj said the Malayan Nature Journal was the oldest journal in South-East Asia. “This special edition of the journal contains an article written by the daughter of the first president of MNS, ” he added.

Its senior adviser Tan Sri Datuk Dr Salleh Mohd Nor said fundamentally, Malaysians should be aware of the challenges and environmental conservation.“As a Malay idiom goes, tak kenal maka tak cinta (you cannot love what you do not know).” “I hope, from the beginning of next year, more news will be published about nature conservation. “More people should become MNS members as people can join more activities carried out by MNS and educate themselves about nature and conservation, ” said Salleh.

Article first appeared in The Star , 21 Dec 2019 with the tittle ” Conservationists’ story in print”