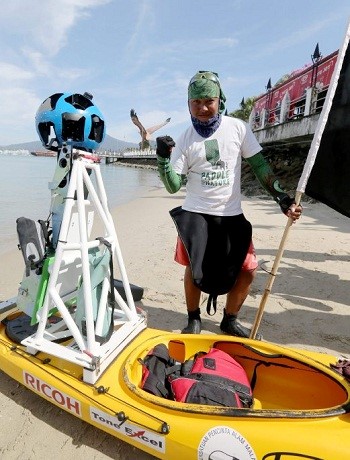 Che Zahiruddin Che Othman, our kayaker has completed the journey. With a challenging 2,000 kilometres completed to his records, he lands safely in the island of Langkawi, which marks the last stop for the Paddle For Nature journey.

We want to thank him, the ground crew, Google Malaysia, the local authorities and communities that were of great support to the programme.

Updates on the data findings can be found at http://paddlefornature.weebly.com/

MNS is paddling for marine conservation where this will be an expedition around Peninsular Malaysia to raise awareness and funds for marine conservation. We will battle the elements, as well as exhaustion and time, to make it from Pengkalan Kubor in Kelantan to Perlis, and end at the Langkawi Geopark, in two-and-a-half months.

The journey encompasses more than 2,000km, taking in 40 sites of economic and ecological significance around the peninsula, such as Marine Parks, turtle sanctuaries, Ramsar sites, Important Bird Areas (IBA) and mangrove forests. Hari will also circumnavigate the beautiful island gems that are Perhentian, Tioman and Penang.

Promoting a healthy lifestyle and coastal conservation – think coral reefs, mangroves and seagrass and the myriad creatures that call those areas home – Paddle for Nature will also feature activities that involve the public, such as dialogue with coastal communities, carnivals, conservation talks, nature treks and educational games for children.

Together, we aim to:

Raise funds for marine conservation, through public donations and sponsorships for Paddle for Nature. The Donate a Kilometre campaign allows individuals to do their part for nature with a minimum RM10 contribution, while corporations can help by donating RM500 per kilometre.