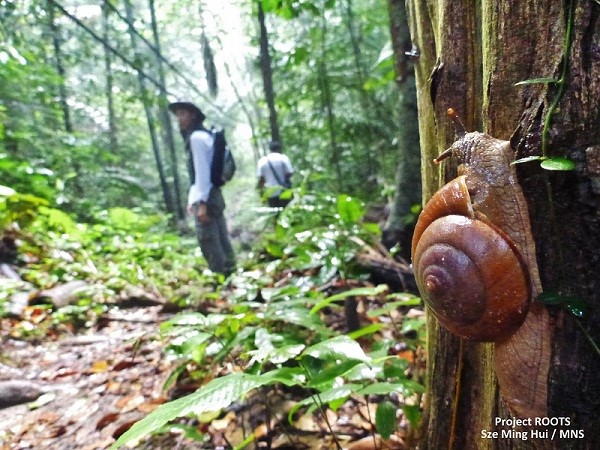 Updates from team MNS monthly monitoring trips to Tioman for Project ROOTS where more information were gathered on the biodiversity, threats, issues and efforts for this project.

From the biodiversity perspective, more interesting stuff were found. For example, our expert found a rare and local species of damselfly, Mortonagrion arthuri on one of the surveyed tracks. The site, where the Mortonagrion arthuri was recorded is of value for conservation because this Odonata species is rare and local. So far only three locations in Peninsular of Malaysia are known to host this species – Butterworth (historical record), Teluk Batik and Tioman Island.

Community engagement is an ongoing process to understand their level of awareness and commitment towards protecting their nature resources. It is important to acknowledge that community work will take time as gaining the local community trust is vital and and that’s what we are working on now.

We found more empty gun shells in the Wildlife Reserve, indicating illegal hunting is still being practiced on the island.

Monthly monitoring and maintenance were also done at our Biorock structure and several giant clam natural settlements were also documented.

Team MNS hope to see more proactive moves and positive results on the conservation of Tioman natural wonder and hoping the best for the reef to be resilient for the upcoming predicted El-Nino.

Our work for nature continues!